The stars among Cretan wines

‘The indigenous star among Cretan whites, Vidiano, can vary from fresh and sappy to peachy and creamy’.
The story of Europe’s 19th-century phylloxera crisis (American root-feeding insect devastates European vines) is well known. Grafting European vines to naturally resistant native US-vine rootstocks was the solution, practised from the late 19th century onwards — but the tiny insect still has the power to cause trouble. California’s use of the inadequately resistant AxR1 rootstock meant costly replanting there in the 1980s. On Crete, however, the problem was a different one.
Phylloxera only reached the Mediterranean’s fifth largest island in the 1970s, just as mass tourism was taking off and as Greek aspirations turned, following the fall of its military junta in 1974, towards its European neighbours. When the vineyards were replanted, it seemed logical to choose fashionable French varieties such as Cabernet Sauvignon, Chardonnay and Syrah in place of indigenous varieties.

Crete, though, is not only the source of a significant volume of Greek wine (the mountain foothills behind Heraklion are the country’s second-biggest wine-producing zone), but Cretan wine traditions are also of extraordinary antiquity. In February, I visited a Cretan wine press constructed in late Minoan times, at about 1580 BCE; it is still surrounded by vines. Two hours later, I stood on the lip of a treading tank carved into a limestone rock at a time when Crete was the Venetian colony of Candia, between the 13th and 17th centuries. They are less than 20km apart, yet more than 2,500 years of wine-making history stretch between the two sets of stones.

The move from native varieties, producing fascinating, gastronomically adaptable wines, to immigrant northerners, producing wines only weakly differentiated from similar varietals the world over, now looks to have been an error. Greece’s economic turmoil has seen consumption on Crete dwindle. Foreign importers, by contrast, prefer true Cretan varietals and blends. “Crete was the last Greek region to join the quality revolution,” says regional specialist and author Nico Manessis, “but it is now Greece’s most vibrant wine region. The potential of its native varieties has a lot to do with that.”

Given that Heraklion lies south of Tehran, Tunis and Algiers, you might assume that conditions are uniformly hot and that Crete is therefore a land of sturdy reds. In fact, some 68 per cent of Cretan production is of white wine, generally bottled between 12.5 per cent and 13 per cent. The reason is altitude. Average temperatures tend to drop by 1C or so for each gain of 180m, and most of Crete’s vineyards lie between 200m and 900m above sea level; they are therefore much cooler than raw latitude would suggest. Technically, too, it is easier to produce pristine, fresh, young white wine than serious gastronomic red wines, where the production process is longer and more hazard-strewn.

The indigenous star among Cretan whites is a grape variety called Vidiano, originally from the coastal city of Rethymno. Depending on the altitude at which is it grown, Vidiano can vary from fresh, green and sappy, like a southern echo of Sauvignon Blanc, to peachy and creamy, with a cascade of petal foam more evocative of Viognier or Roussanne. Thrapsathiri is another local variety which can astonish with its delicacy and scented charm (its fragrant slightness can evoke Galician Albariño). The widely planted Vilana struck me as more typically “Greek”: structured and lemony. It makes an amenable blending partner. Dafni is the white Cretan variety with the most memorable name, and good examples can indeed smell and taste of the bay leaves that name evokes in Greek.

The star for me among the red varieties is, in fact, Crete’s most widely planted: Liatiko. Its pale colour, rich natural sugars and propensity for oxidation mean that it often ends up as a sweet wine — but the grandest Liatiko emerges in dry form, when its generous tannins have been leached from the skins to balance that natural sweetness. It also blends exceptionally well with another indigenous red variety called Mandilari, which is its opposite: deeply coloured and much more acidic but lacking the central palate fleshiness that Liatiko has in abundance. Kotsifali is a third indigenous red which in general makes a fruitier and simpler wine than either Liatiko or Mandilari. Widespread use of the Crete PGI (Protected Geographical Indication) means that, helpfully, these grape variety names often appear on labels.

A second Cretan area of great potential is found in the lower-lying Lasithi zone to the east of the island, in the PDO of Sitia. One of the two leading producers here is the lonely monastery of Toplou; its wines are made by Manolis Stafilakis on behalf of the nine monks. Red clay, schist soils and dry, windy, arid conditions provide both whites and reds with much greater density and succulence than the high-altitude Heraklion hinterland. The other is the domain of Yiannis Economou, who crafts autumnal reds which can evoke those of the Piedmontese foothills around Alba, where he first trained.

2015 Vidiano, Idaia, Crete, Strictly Wine (strictlywine.co.uk) £12.70; The Vineyard (thevineyardwineshop.co.uk) £18.45. The Idaia Vidiano (grown between 400m and 500m) is a fresh, crunchy, faintly green-toned rendition with bright, engaging flavours of orange and lemon, some pithy textures and bite, yet enough inner structure and sap to match food well too. 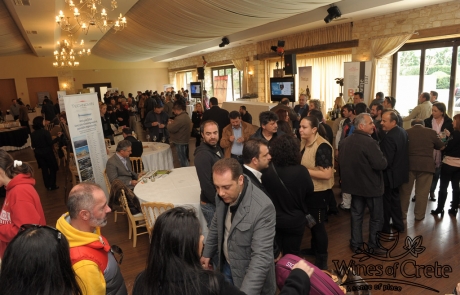